New New Deals: the legacies of colonialism in infrastructure development

This event is cosponsored by the Department of History.

The Biden Infrastructure plan proposes $2 trillion investments in new infrastructure throughout the United States [1]. It is building on economic theories of public spending that predate today’s lingering neoliberalism [2]. It proposes projects specifically addressing environmental conservation, climate change mitigation and adaptation [3]. However, the place of tribes and Indigenous nations in this new public spending initiative is uncertain.

The original New Deal devastated tribal land holdings, led to the destruction of species and environments important to Indigenous nations, and ushered in the process for modern tribal governance and politics that struggles into today (Parman 1976, Taylor 1980, Weisiger 2007, Bsumek 2008). Dams choked Indigenous water ways, flooded tribal lands, and left nations without water rights. Rural electrification served white communities and left Native communities without running water or electricity. Roads were built across tribal homelands, but not to Indigenous places. In the Navajo Nation, the sheep economy was forcefully and violently destroyed through livestock reduction. However, the New Deal led to many important reforms like the Indian Reorganization Act of 1934 and the Indian Mineral leasing and Development Act of 1938 that are the basis for much of today’s federal-Indian policy (Allison 2015, Taylor 1980). Biden’s infrastructure plan proposes new spending that mirrors the spirit of the New Deal, but what are its colonial implications on tribal nations?

This presentation asks: “What political and economic changes and risks to Indigenous sovereignty might this new public spending initiative portend for Indigenous nations?”

“What are the future risks and important transformations at work around proposed new energy technologies and new infrastructure?” “How is tribal sovereignty impacted by energy transformation?” “What will be the basis and practice of Navajo governance as a result of shifting infrastructure investments?” 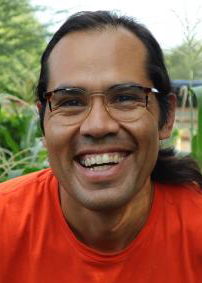 Andrew Curley (Diné) is an Assistant Professor in the School of Geography, Development & Environment (SGDE) at the University of Arizona. His research focuses on the everyday incorporation of Indigenous nations into colonial economies. Building on ethnographic research, Curley’s publications speak to how Indigenous communities understand coal, energy, land, water in an era of energy transition and climate change.