View a recording of this talk on our Coffee Hour Channel.

Geopolitics can be understood as an analytical category simultaneously for approaching the contemporary world order, as well as to interrogate sexuality and gender identity as it is produced through/with statecraft, and in the striving of sexually marginalized communities to create bodily security. Global governance, international human rights principles have failed to protect transgender cross border migrants. Simultaneously, the present epidemiological initiatives around the COVID19 pandemic is yet to fully address the impact of the pandemic upon the lives of LGBTQ communities. The containment and prevention of the virus requires spatial strategies such as sheltering, social distancing, and physical isolation. Transgender communities experience physical isolation, and unsafety on an everyday basis in home, work, and public spaces. Spatial strategies for containing the virus has created additional burden on diverse transgender communities globally.

This paper interrogates the ways in which transgender/Hijra/Koti/Khwajasira (THKK) activists are forging cross border alliances in South Asia in order to win legal recognition from their nation-states, as well as developing survival networks in the wake of the pandemic. Such alliances can be conceptualized as a shape shifting assemblage of supra state institutions, political actors, on the ground activists and human rights rhetoric and yet take the individual nation-state as targets for legal change. Building upon feminist scholarship about affective geopolitics, or as how state craft is felt at the scale of the body, this talk argues for challenging binaries of sex/gender, as well as the paradox between sovereignty and international rights. Queering the geopolitics of the COVID19 pandemic require questioning the stable boundaries of sex/gender, public and private space in order to understand how the transgender subject is trafficked between nation-states, while trafficking international and local institutions in order to achieve a livable life. 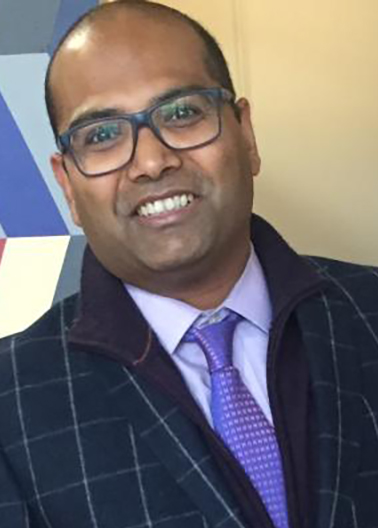 Their scholarly work has been published in journals such as Human Geography, Women’s Studies in Communication, Disability Studies Quarterly, Contemporary South Asia, SEXUALITIES, Gender, Place & Culture, Emotions, Space, and Society, and the Scholar and the Feminist (S&F online). They are the co-editor of Friendship As Social Justice Activism: Critical Solidarities in Global Perspective (University of Chicago Press), and Queering Digital India: Activisms, Identities and Subjectivities (University of Edinburgh Press).

Debanuj is presently working on two book projects. The first is tentatively titled as Trans/Detention: Politics of Trauma and Trans/Migrant Justice this monograph length project investigates how transgender detainees and asylum seekers are subjected to trauma within detention centers and asylum courts in the US, and how transgender immigrant rights activists are transforming trauma into creative political action that seeks to disrupt the national security state. The second monograph is tentatively titled as Sexing the Region: Cross Border Trans/Activisms in South Asia. This monograph opens up questions about how border conflicts between nation-states in South Asia is felt at the scale of the transgender body, and argues for a regional, inter-scalar understanding of transgender lives in South Asia.

Debanuj self identifies as Koti/Gender Queer. They love traveling, spending quiet time alone, and are an avid foodie.