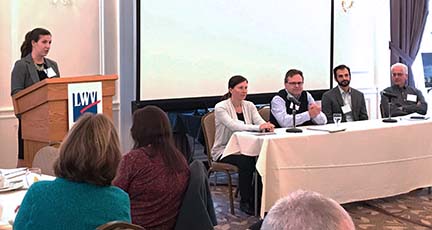 Jennifer Baka, seated at the left end of the table, participates in a “Shale and Public Health” conference at the University of Pittsburgh Graduate School Of Public Health, in November 2017. The event was organized by the League of Women Voters of Pennsylvania.

In her teaching, research, and service, Baka tries to debunk myths about energy. One of the most common, she said, is that renewable or green energies are unquestionably better for the environment. “... we might just be trading one type of environmental impact for another, shifting the costs without a net gain."

Jennifer Baka joined the Department of Geography in the summer of 2016. She is an assistant professor of geography who studies energy using the emerging subfield of political-industrial ecology.

“Political-industrial ecology is the integration of two kinds of systems thinking,” Baka said.  “From an industrial ecology perspective, we think through the whole supply chain for a particular resource.  For example, from the extraction of crude oil, to transportation, to refining it into gasoline (and other products), to distribution, to the exhaust coming out of your car.”

“From a political ecology perspective, we think about the political and economic processes shaping that supply chain,” she added.  “How are regulations created? Who decides? What are the implications?”

Bringing the two areas of thinking together, Baka considers the metabolism along the whole supply chain and how those systems are governed in a systematic way. “We can identify where power exists. We can think about the way an energy system is regulated. We can ask: Is it fit for purpose? For example, does it provide adequate environmental protections?”

Baka’s interest in studying energy and asking those kinds of questions was kindled by her experiences growing up.

“I’m a former northeastern Pennsylvania coal mining town resident. I grew up in a town that still has a mine fire—Mayfield, Pennsylvania, outside of Scranton. I had several respiratory issues growing up due to the mine fire, including asthma, which regularly kept me out of school for thirty days a year, so I was always interested in how government decides what to remediate and what to leave and let burn. I graduated from college in 2000 when energy deregulation was happening in the United States and energy privatization was an interesting problem to study.”

In her teaching, research, and service, Baka tries to debunk myths about energy. One of the most common, she said, is that renewable or green energies are unquestionably better for the environment.

“If you take a political-industrial ecology perspective, looking at solar panels for example, you’ll discover that manufacturing solar panels requires a lot of energy and uses numerous chemicals and rare earth elements. It’s also difficult to recycle solar panels. You can see that we might just be trading one type of environmental impact for another, shifting the costs without a net gain.  Another example is the biofuels program in India, which I studied extensively for over a decade. In that case, public lands were taken away from poor rural communities that had been using them for grazing. In Pennsylvania, hydraulic fracturing, commonly referred to as fracking, brings up another interesting case, to see firsthand the potential impacts to ground water and risks to worker health and safety.”

Fracking is a topic Baka studies extensively. “I am really struck by the parallels between the biofuels program in India and fracking in Pennsylvania. Biofuels development in India was framed as an effort to improve the country’s energy security and also create new jobs for rural communities, but we found that was not the case. The new biofuels program provided jobs only seasonally compared to previously existing agricultural jobs that provided work year-round. That same rationale in Pennsylvania has positioned fracking as a way to revitalize rural communities.  (As an interesting aside, it is unique to the United States, that landowners hold the mineral rights to their property; in most other countries, the government holds the mineral rights.) Biofuels in India was a bust. We are going back to see how it’s going now and interview those involved.”

“Countries like China, South Africa, and Germany commissioned scientific councils to investigate the environmental impacts compared to the economic benefits before going ahead with fracking, and what protections were needed. They were proactive. In the United States, we usually let these projects go live and then we backfill, which makes it challenging to address the issues later.  Ideally, we would conduct prospective analysis of costs and benefits, so we can mitigate possible negative outcomes.”

That’s what Baka is trying to do with her next big project; looking at the emerging petrochemicals industry outside of Pittsburgh which may affect an area as large as the entirety of Appalachian rural America.

“The ethane cracker plant will use byproducts from shale gas extraction to manufacture plastics. Pennsylvania wooed Shell to build the cracker plant in Pennsylvania by giving a $1.65 billion tax break—the largest in state history. We have been conducting preliminary research on the plant for the last year with seed funding from Penn State’s Institutes of Energy and Environment and the John T. Ryan EMS Faculty Fellowship. I am currently working with an interdisciplinary team of geography and law students to set up a political-industrial ecology analysis of the plant,” Baka said.

Over the past year, they have mapped out the system of the plant, from the shale gas wells, to the pipelines to the cracker plant, to the consumer end-use, and finally to the plastic pollution. “We are using this data to ask: What are the material and energy flows through the whole system? What are the environmental impacts of the system and how do these impacts vary across time and space? How are those flows regulated across different political scales— federal, state, county, municipal?” she said.

Going forward, Baka is applying for additional grants “to evaluate the fitness of the current regulatory structure, specifically whether the regulatory structure adequately addresses community concerns and helps to mitigate environmental impacts.” To better inform her work in the Pittsburgh area, she also wants to evaluate similar plants that are already operating in Kentucky, Texas, and Louisiana.

“One key area of concern that we have observed in our preliminary research is the potential public health impacts from the cracker plant. The plant will release volatile organic compounds (VOCs) as a waste product of the refining process. These toxins will be locally concentrated in the area surrounding the plant, which already suffers from poor air quality due to the industrial history of the region. Yet, supporters of the plant argue that the plant is necessary because it will help bring much needed jobs to the region,” Baka said, adding, “the Shell cracker plant presents the opportunity to evaluate how to weigh environmental costs and economic benefits of energy development. This is perhaps one of the longest standing challenges and controversies in environmental policy making and I’m looking forward to shedding new light on the topic.”

“There is no such thing as a silver bullet answer for a sustainable energy future, but I think that a diverse energy supply is the best approach. It would reduce supply shocks as well as the impact on individual stakeholders.  We need to have both fossil fuels as well as renewables in the mix,” Baka said. “And people need to know where their energy comes from, to use just what they need for their daily activities, and to be aware of the environmental impacts of energy consumption.”