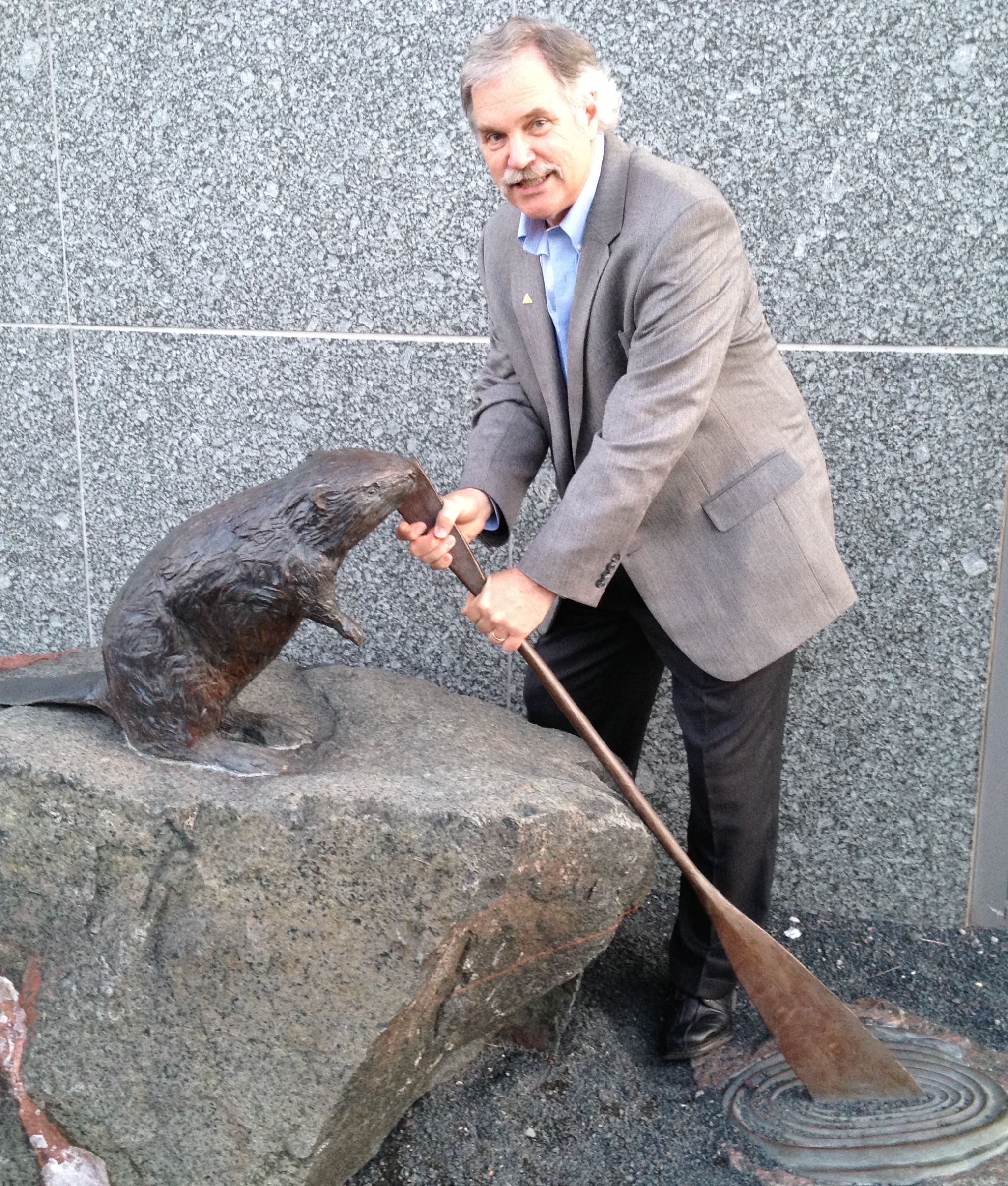 Robert Brooks retired to emeritus status at the end of August 2018 after 38 years of service at Penn State (25 years as founder and director of Riparia and 15 years in the Department of Geography).

Q: What made you want to become a geographer/ecologist?

A: Ever since I was about 5 years old I’ve been fascinated by the natural world—learning the names of animals and plants; exploring small streams and wetlands; and reading tales from wilderness experiences. My friends and I would look at picture books of animals with maps of far off places, such as Australia and Africa, and memorize the species that lived there. It wasn’t until high school and my camping experiences in Scouting that I learned about ecology as a profession. In graduate school at UMass, I transitioned into the applied field of wildlife biology and management, working with aquatic mammals (beaver, muskrat, otter) that eventually led me to combine wildlife biology and wetlands science for my career. At Penn State, I spent 3 years at the DuBois Campus in Wildlife Technology, moved to University Park in Wildlife and Fisheries Sciences for another 20 years, and then joined the Department of Geography in EMS where we could learn more about landscape ecology and spatial thinking.

Q: Why did the study and protection of wetlands appeal to you?

A: I believe the dynamics of water fascinates most people —the flow of a river, the concentric rings of a water drop on a pond’s surface, or the patterns formed by water and aquatic plants— think Monet. Water in its many forms certainly drew me in, to dam up small streams, scoop out crazy critters from the water, paddling canoes, then kayaks, on river, lakes, and seas. So in the 1960s and 1970s when it became apparent we were polluting our life-giving waters, and all that depended upon them, I was upset, and began in small ways doing what I could to learn about them and protect them.

Q: What would you say is your most gratifying project or achievement during your career?

A: There are many aspects of my career of which I am proud – continuity and focus on a diversity of conservation science studies on many aspects of wetlands and wildlife for four decades, reintroducing species such as river otter and fisher back into Pennsylvania, building trust among a network of working professionals – but the singular, most gratifying achievement is recruiting, advising, and watching all of the graduate students (46 and counting!) complete their degrees and move into exciting careers and lives making a difference.

Q: What are some of the most important changes you’ve seen in either the discipline of geography or in higher education?

A: Over my career, academia has moved toward more specialization. Not that everyone was a generalist, but there has been growth in sub-disciplines, blending of disciplines, and most notably, a proliferation of journals and other communication outlets. Another dramatic change has been the digitization of both professional and personal lives. Information flows faster and faster. This has benefitted aspects of geography, and related fields, such as landscape ecology, habitat mapping, use of remote-sensing imagery. Knowledge, however, I believe stems from deeper thinking and reflection, both of which are in short supply these days.

Q: How have your research interests evolved or changed over your career?

A: I began my graduate work as a wildlife biologist focused on applied field studies in natural resources. The emphasis was on populations, habitats, and environmental issues. Since I was working on aquatic and wetland species, I was invited to volunteer on a local conservation commission and be in charge of wetland permitting. That led to further understanding of environmental laws, regulations, and policies at local, state, federal, and eventually, international levels. To fully comprehend wetlands from scientific and policy perspectives requires an interdisciplinary approach, so learning about hydrology, soils, water chemistry, restoration ecology, agency missions, and other topics was necessary. I find exploring the boundaries between disciplines stimulating, and geography has plenty of boundaries to explore.

During the early 1980s I was a Master’s student at East Stroudsburg University and also coordinating a project to restore river otters in Pennsylvania.  On a cold fall night in 1982, a large, somewhat contentious, local audience had gathered at the fire station in the town of Cross Fork in northcentral Pennsylvania to hear me review controversial aspects of the project. In the back of the room was a tall, thin, young man with black hair and mustache, who stood out as not “typical” for this audience.  After my presentation, this young man approached me, thoughtfully indicated that he appreciated the way I handled the meeting, and asked me to contact him to be my advisor if I was ever considering a Ph.D. program.  At the time, having no academic aspirations beyond a master’s degree, I had never given thought to pursuing a Ph.D. or a career in academia.  The kind and considerate young man offering me such a wonderful opportunity was Rob Brooks and, in 1986, I became Rob’s Ph.D. student. Ultimately, my first meeting with Rob, at a fire station in remote northcentral Pennsylvania, positively changed the entire focus of my professional life.  I am forever grateful for that first, unexpected meeting with Rob and the wonderful interactions we have since shared. — Thomas L. Serfass, Ph.D. Wildlife & Fisheries Science, School of Forest Resources, 1994

It’s rare to meet someone as remarkably accomplished as Rob who is also so approachable and grounded.  His kind encouragement and genuine, unwavering optimism were vital to pushing me through even the most overwhelming of research challenges.  During Riparia lab meetings, I always appreciated how forthright he was with the fact that he still grappled with concepts and projects too.  It taught me that the process of working through a problem is universal, from the greenest of grad students up to the most distinguished of professors, and I will always be grateful for the way in which Rob has embraced that as just another part of the job.  I am so fortunate to have been under his wing during my time at Penn State and to have been able to work with the family he has built within Riparia - what a wonderful legacy he leaves in his place as he moves onto this next part of his career!— Claire Hirt,  M.S. Geography 2016

Rob is a thought leader in wetland science on several topics, but what has resonated most with me are his views on integrated riparian ecosystems. In the worlds of regulation, assessment, and still to a high degree in research—three worlds that Rob has straddled throughout his career—wetlands, streams, and floodplains are typically treated as discrete entities. Trying to understand them as interacting parts of an integrated system in the landscape with sometimes crisp and sometimes blurry boundaries is a continuing challenge in our field, and Rob has pushed the boundaries of this dialogue and continually directed the field’s attention to advancing this integration and line of inquiry. But beyond his intellectual contributions and his deep dedication to the field, Rob is just a good, decent person. He treats people with respect. He’s a good listener. When given the chance to say something negative about someone, and it doesn’t serve a bigger purpose, he generally keeps his mouth shut. Kids flock to him. Whenever I go to meetings and mention Rob’s name peoples’ faces light up, and they earnestly ask, “How’s Rob?” He’s consistently genuine, fair, deeply kind, fun, and warm no matter the setting—doing field work, hosting parties, teaching, directing multi-institution research projects, advising. He handles himself with integrity and enthusiasm and inspires his students and others to do the same.— Kristen Hychka, M.S. Wildlife and Fisheries Sciences 2004, Ph.D. Geography 2010