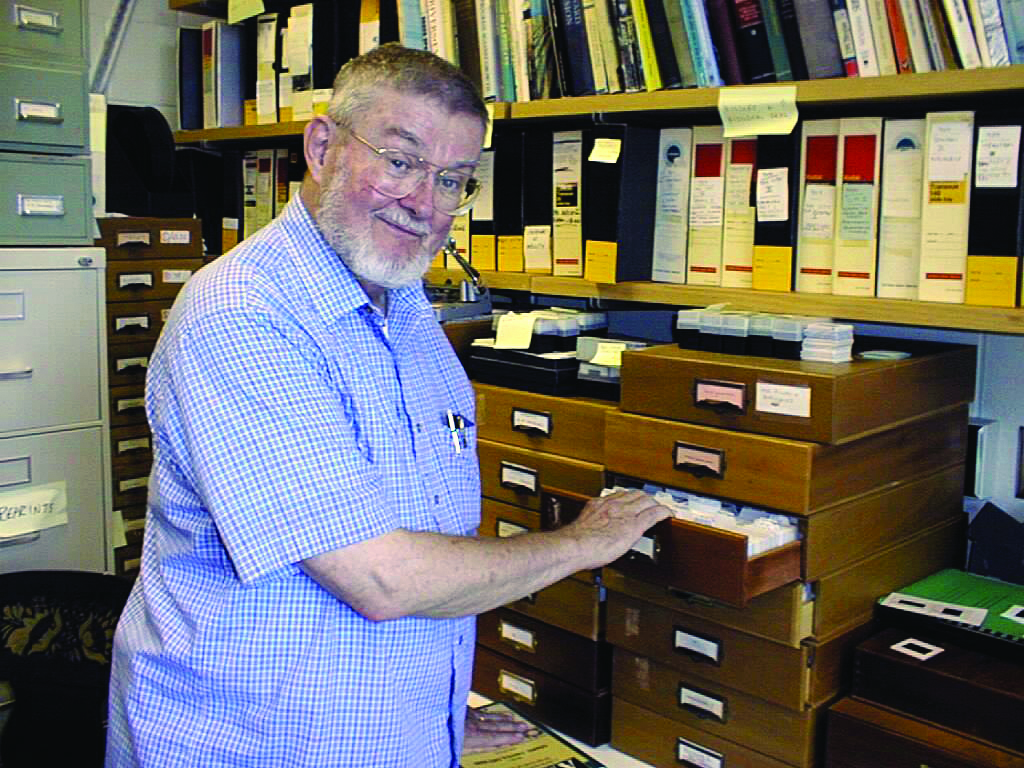 The first part of this article is an excerpt from, “Classroom Masters," originally published in the May/June 1992 issue of The Penn Stater. The remembrances at the end of the article were provided  to the Department of Geography in spring 2018 by former advisees .

An energetic man in his late fifties greeted us by switching off the lights and switching on a slide projector.

"As we plunge into intellectual darkness, let me assure you that after this class, you will never be able to look at the world in the same way again. At least, I hope not." In spectacles and a khaki field jacket, Peirce Lewis fit everybody's idea of a geography professor.

An energetic man in his late fifties greeted us by switching off the lights and switching on a slide projector.

"As we plunge into intellectual darkness, let me assure you that after this class, you will never be able to look at the world in the same way again. At least, I hope not." In spectacles and a khaki field jacket, Peirce Lewis fit everybody's idea of a geography professor.

"I'm going to show you the cultural landscape of the United States and give you the tools to understand why things are where they are, and how they got to be that way," Lewis continued. "Then you will show yourselves and me what you have learned by going out there and reading the local landscape yourselves. This first slide . . . "

The lights snapped on again. I blinked, not just because my eyes rebelled against the sudden brightness, but also because my mind reeled at the revelations I had just encountered. I had always thought of geography as nothing more than maps of places; I had never considered the impact of people on those places or of the places on people.

Lewis handed us a five-page list of important dates in the history of North America, along with the basic geographical features of the United States and Canada. "Your first assignment is to identify all of these places and features on a blank map and to commit all of these dates to memory."

We all looked at each other and groaned.

"Before you can begin to understand why things are," he explained, "You must know what, when, and where they are."

Chris Gazze '91 was a fellow student in that geography course. "I was surprised when he started the first class by showing a picture of a barn and insisting that it was an interesting cultural artifact," Gazze commented. "Come on, what could be remotely interesting about a barn? But Lewis's enthusiasm really rubs off on everyone, so I was willing to suspend my disbelief for a while. And pretty soon I saw his point."

Lewis himself sees three prerequisites for good teaching: "One: you have to love your subject. Two: you have to know what you're talking about. Three: you have to like the students. The question is whether you can make an impact on somebody's mind and soul."

He believes that teaching is a two­way street, that both students and teacher must provide positive reinforcement. "In some classes " he noted, "students behave as if they're brain-dead, but even these can sometimes be stimulated."

Lewis claims to be "somewhat resentful" of students who don't want to be there, those who cross their arms and say, "I gotta be here. Learn me."

"'Learn me' ain't a transitive verb!'' Lewis insists. "Students and teacher must come to a common ground.”

He says the most successful experiences occur when students teach themselves. A great example is the State College walk we had to take for Geography 102, "The American Scene." It consisted of a nine-mile trek through the streets and alleys of the town, after which we had to write a twenty- to thirty-page paper about what we saw. The amount of effort I put into that project was almost as tremendous as the blisters on my feet, but I learned to see things about my environment I had never noticed before.

"Of course," remarked Professor Lewis when I told him how much I'd gained from that. "You discovered the world on your own. It's the same deal with maps in class—when students have a map in hand, own it, mark on it, they discover that a map isn't just something out there behind Dan Rather's head; the best thing is when they can get out there in the world and see what it is they're learning about. That's why I like geography. I like to do what's called 'guided discovery' —showing them how to learn about things."

"It took me a couple of months after the class ended not to constantly analyze the architectural styles of every house we passed," Stacy Nestleroth agreed. '"Look!' I'd exclaim to my bewildered parents, 'it's another Sears Roebuck cube! And there's a mansard roof on that building!' I'm sure they got pretty sick of it. I don't do that as much any more, but the principles of looking beyond the surface have stayed with me. I see the world a lot differently now."

Gazze was particularly impressed that Lewis is more concerned with the quality of your work than the mere processing of information to meet a deadline. "In Geography 404, The American Scene II, I really struggled getting my final paper done. Professor Lewis deferred my grade through the summer, when I had a chance to go out to California and actually look at the stuff I was studying. That made a huge difference in what I could produce."

"The atmosphere of every class is different," the professor admits.

"Some are perfectly wretched, while others are a fabulous success. In one of the first couple of classes I taught— back in the Ice Age, that is— I gave the students my own course evaluation. Their general reaction was, 'You're O.K., Lewis, but you're far too sarcastic.' So I started listening to myself, and I realized they were right. I wouldn't want to do anything else," Lewis said, grinning. "And the Commonwealth of Pennsylvania is even paying me to do this!"

Peirce was an inspiration, a mentor, a friend, a window on the world and a giant presence in so many ways. I'm grateful for having had the opportunity to spend as much time with him as I did at Penn State and through our correspondence and occasional visits in the years after.

I last saw Peirce when I visited in 2008 for the fortieth anniversary of Coffee Hour. A bunch of us went out for dinner that evening, a group that included Wilbur Zelinsky and Greg Knight, who are now also missed. I also stopped by Peirce and Felicia's house the next day before leaving town to return to Toronto and spent a couple of hours visiting there, too. It was right before the first Obama election and I know we talked politics. As was his wont, Peirce sent me home with a couple final mementos which I now hold dear along with all the other memories. —Brian Banks (’84g)

What do I recall about Peirce Lewis? For one, he was a strong disciple of William Morris Davis, whose theory of erosion cycles predicted ancient erosion surfaces dubbed peneplains. Peirce saw several of them in the Ridge and Valley area around State College. By contrast, Larry Lattman, the geologist who was my other M.S. thesis advisor, saw only local broad uplands responding naturally to geologic structure and denudational processes, as predicted by John Hack’s theory of dynamic equilibrium, with which I agreed, much to Peirce’s dismay/disgust. My thesis was approved for defense after much back and forth, until Peirce and Larry agreed to disagree—provided I carefully qualified what I wrote. A useful experience, to be sure.

I also recall Peirce’s fondness for Erwin Raisz’s “Physiographic Diagram of the United States,” which I used as the primary text when I taught his landforms course when he was on leave during my final year at Penn State.

Aside from an appreciation of careful discourse, the most valuable thing I learned from Peirce is that one can shift gears among research foci: I caught him well after he had shifted from political geography (which he still taught) to physical geography, which he was jettisoning to focus on cultural/historical/landscape geography, for which he is best known. That one need not feel locked into a subfield in which you’ve made a heavy investment was a useful lesson. —Mark Monmonier (’69g)

I attended college and graduate school during a national division driven by racial tensions, gender roles, and an unpopular war.  Within the Penn State Department of Geography, there was a civil war over qualitative versus quantitative methods students had to navigate.  Interesting times, indeed.

My love of place (going out in the field with open eyes) led me to Penn State.

Peirce Lewis spoke his mind, even when it was painful.  I needed to rewrite my master's thesis as it wasn't up to his standards.  This prepared me for a career doing research motivating people to do the work to change. Dealing with the world as it is gives a great life lesson. I learned from him that anywhere you go, you really need to see what is there.  The best class I have ever had was field methods with a sixteen-day trip throughout the Eastern United States.  Everyone used a topographic map to plan a local field trip.  Mine was in Virginia tobacco country, another Harlem.  Traveling in a large van, we covered a lot of country, most where tourists seldom go.  In a van with your professor for that long—an awesome and rare experience.

For a geographer or anyone loves travel, I cannot think of a better experience.  I did not use my geography for my career, but his love of the field made me someone eager to see what is over the next hill. —Joel Stegner (’74g)