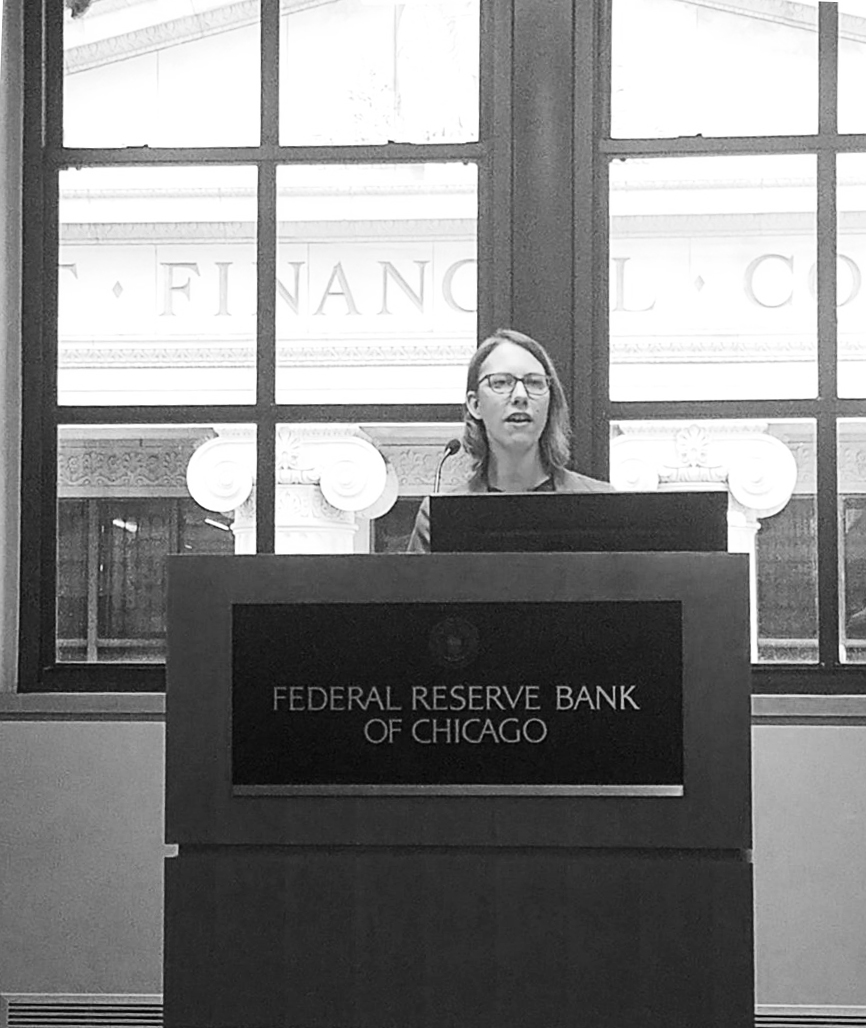 Rosenman presents her research findings about philanthropy and the urban governance of Detroit at the Chicago Federal Reserve Bank in May 2019.

"As a political economist, I am centrally concerned with relationships of power and questions about who benefits— and who does not,” she said. “Those questions are also deeply geographical, as historical spatialities of investment and disinvestment produce urban space as desirable or not desirable for potential investors.”—Emily Rosenman

Emily Rosenman joined the Department of Geography in summer 2019 as an assistant professor of geography. She is an urban and economic geographer who explores the connections between finance, urbanization, and inequality.

“I am motivated to understand the relationships that produce both wealth and impoverishment, with particular attention to the uneven geographies of financial investments and racialization that characterize contemporary urban life,” she said.

Rosenman became interested in these subjects while working as a federal disaster management contractor, where she learned about the recovery process of New Orleans post-Hurricane Katrina.

“I became interested in why the storm’s damage—and the city’s recovery—was so uneven,” she said.

“At the University of British Columbia, I learned about the racialized injustices present in city and regional planning and also in the American mortgage and rental housing markets,” Rosenman said. “That led me to projects analyzing predatory mortgage lending in majority-Black American neighborhoods in cities hard hit by the financial crisis, like Detroit and Cleveland.” In all of those situations, I learned that the presence of inequality and poverty in cities was something that must be constantly legitimated as a normal process of the market, whether by government officials, mortgage bankers, or nonprofit workers trying to address socioeconomic problems.

“Poverty is often framed as normal in a market-based society,” she said “While I agree that the presence of poverty is inevitable under capitalism, it is produced by market processes which also benefit from it.”

For this reason, Rosenman prefers the term “impoverishment,” because, she said, “it directs our attention to the social relationships of power and privilege that are actively producing and reproducing geographies of poverty.”

As a critical geographer, Rosenman believes her role is to question inherited assumptions about how the economy works.

“As a political economist, I am centrally concerned with relationships of power and questions about who benefits— and who does not,” she said. “Those questions are also deeply geographical, as historical spatialities of investment and disinvestment produce urban space as desirable or not desirable for potential investors.”

The idea of what makes an investment desirable to investors has led Rosenman to her current research interest, social finance, a financial product that attempts to make profits for investors while also producing benefits for society.

“The development of this market is also an ideological claim about the role of finance in a just society,” she said. “The idea that there is no need to rid society of the economic processes that produce poverty—and that the wealthy can instead use investments to ‘fix’ social problems while continuing to profit—is very appealing to powerful actors in society.”

However, Rosenman said, it requires a huge industry of financial and policy intermediaries to contain the contradictions inherent in making poverty profitable for investors and legitimizing for-profit interventions as a solution to impoverishment.

“In my research I have found that solving social problems with for-profit investments works for some things and not for others,” Rosenman said. “A lot of social problems are not readily profitable, so as governments, philanthropies, and the nonprofit sector move toward this idea that solving social problems requires a return on investment, many places and people can be left out. For example, in looking at what makes a social finance investment in affordable housing ‘successful,’ I found that tenant selection is very tied to normative ideas about who is deserving of a subsidized apartment versus who is not.”

But despite those kinds of problems, Rosenman does see a potential upside. “I think social finance marks a shift in how investors think about their connection to how they make money,” she said. “The idea that profits come from somewhere—and often from processes that damage people or nature—is an important step in illuminating the injustices that financial processes often obscure.”

Coming up on Rosenman’s research agenda are the rise of green finance, which claims to preserve the environment by making investments in things like ecosystem services; and racial justice investing, in which investors try to solve the racial wealth gap in America by investing, for example, in Black entrepreneurship. The latter is often put forth as a market-based alternative to reparations.

Rosenman is also following the aftermath of the 2008 mortgage crisis in the racialized geographies of housing sales and foreclosures in Cleveland among other financialization phenomena.

For all her projects she is seeking graduate students who are motivated by the social justice implications of research and also motivated “to help me deal with a massive and messy dataset of Cleveland housing data!”