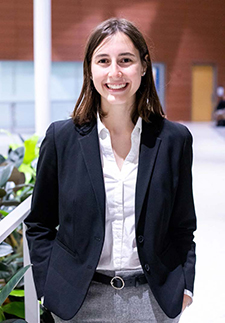 Byrd is the recipient of the department’s top undergraduate award, the Jeff Gockley Memorial Award, which was established in 2005 to honor the memory of alumnus Jeff Gockley, who graduated in 1997. Byrd said she intends to allocate the scholarship to her tuition.

“I was pleasantly surprised and honored to receive the Jeff Gockley award,” Byrd said. “This award is given to the top geography student in the GIS option. As a rising senior, I have had the opportunity to take many of the GIS courses the department offers, and I have thoroughly enjoyed all of them.”

Byrd said she attributes her academic accomplishments over the past year to her enjoyment and pas-sion for GIS and an ability to persist despite initial challenges.

“During fall semester 2019, I took GEOG 365 Introduction to GIS Programming, which was my first programming course,” Byrd said. “I completely failed the first exam and was really frustrated with my lack of understanding of the material. However, at the advice of some upperclassmen who had already taken the class, I stuck with it, eventually aced the final and felt like I really understood the language.”

Similarly, Byrd said she is proud of the group project she and her classmates produced in GEOG 301 Thinking Geographically, during spring semester 2020.

“We worked very hard through-out the entire semester, and despite everything having to move online due to COVID-19, we all still met virtually and worked diligently to produce a quality project.”

Completing a group project virtually was a big change from the way Byrd said she prefers to work and from the experiences that have provided important memories for her.

“The late nights completing assignments in 208 Walker Building feel like such quintessential college memories,” Byrd said. I love how willing geography students are to step aside and help their classmates. There have been so many instances when one student might have finished the project hours ago, but they stick around to answer everyone’s questions and provide some much-needed laughter.”

Byrd said she would recommend new geography students join clubs, like UnderDoGs, of which she is vice president. They’re a great way to meet other students with a passion for geography,” she said.

She has recommendations on courses too.

“Specifically for GIS-focused students, I would recommend taking the programming and database management courses that the department offers because having a strong foundation in any language makes picking up other ones much easier.”

During summer 2020, Byrd has been participating in a virtual internship with Duquesne Light Company, which has exposed her to a lot of real-world GIS applications, including Python and other new programming languages.

“It really confirmed my passion for this field,” Byrd said.

Byrd said she is looking forward to her senior year at Penn State and fall classes, especially with her favorite professor, Roger Downs. After graduation, she plans to pursue a career in the renewable energy industry or the federal government as a GIS professional.

“I would also like to eventually pursue a master’s degree in a data science or GIS field, maybe the new spatial data science degree Penn State is offering,” she said.