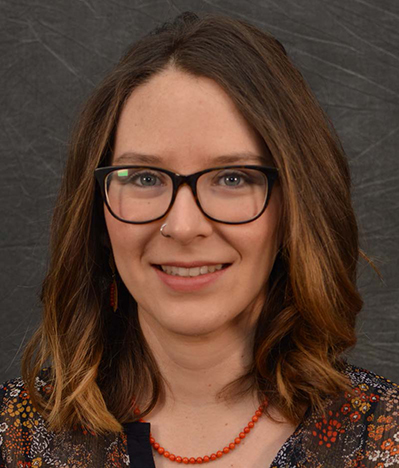 “When I first found out that I had gotten this fellowship, it helped ease some of the feelings of insecurity that come with feeling out of place,” Rodriguez-Rocha said. “It was validating, in a sense, to think that maybe I did belong in a geography department after all.”

Rodriguez-Rocha said that out-of-place feeling came from three things: she is a nontraditional older graduate student; she is an international student; and her academic background was in women’s, gender and Latin American studies.

“This fellowship was more than I had hoped for, for sure, but it was a big part of why I was able to come to Penn State,” she said, add-ing that she was grateful for all the help she received in completing the application.

“Coming here, it was really lovely to experience what it means to actually be part of a department, have an office with officemates, and run into people in the hallways or at events like Coffee Hour, or student-led initiatives like Wednesday Club,” Rodriguez-Rocha said. “Those ended up being opportunities to bond with people in the department.”

She said that Brian King, Melissa Wright, and Lorraine Dowler are inspirations to her. And that Emily Rosenman’s “eloquent and clear” Coffee Hour lecture made her want to become a better public speaker.

Rodriguez-Rocha said she also enjoyed teaching, because it helped her to build closer relationships with faculty members and classmates.

That experience is echoed in the advice she would give to new students.

“I would tell them to spend time in their office space or the lab at least a couple of days a week to make sure they get to know people, and try take on service roles like being a graduate student representative or Supporting Women in Geography officer. These are ways to shape the program into something closer to what you hope it would be,” she said. “I would advise them to rely on their peers, form study groups, and have a cohort group chat because it is a way to create an intimate community with shared experiences. When things get tough, like during comprehensive exams, but also life, they will be the ones to see you through.”

Rodriguez-Rocha also would recommend taking a combination of geography seminars and seminars outside geography, “because you can think geographically about basically anything,” she said.

“My current research project looks at embroidered iconography in the protests against femicide in Mexico from the perspective of feminist care ethics,” Rodriguez-Rocha said. “Feminist geographers have done a great job of showing that practices of care are spatialized, and my project thinks about the ways in which this particular iconography, seen as a practice of care, seeks to restore the geographies of murdered women and girls and resists masculinist nationalist views that justify the killing of women with impunity.”

In the future, Rodriguez-Rocha said she hopes to work as a researcher in an international organization or a governmental institution back home.

“I would like to be able to do work that supports civil society in a way that bridges the current divide between grassroots movements and academia.”