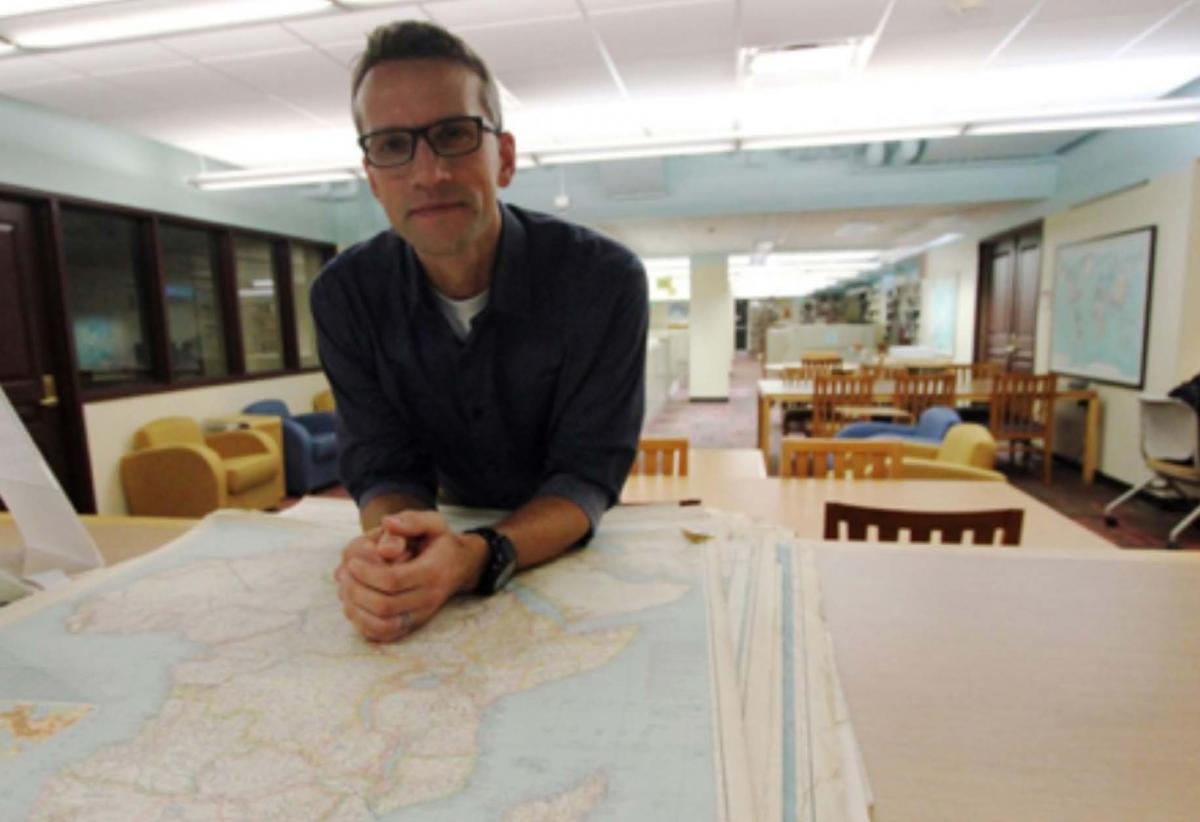 Nathan Piekielek is an associate professor of geography (a new joint appointment beginning fall 2020) and the Kalin Librarian for Technological Innovations and Geospatial Services Librarian at Penn State. He leads Pattee-Paterno Library’s Donald W. Hamer Center for Maps and Geospatial Information, where he promotes and facilitates spatial literacy and the use of maps and geospatial technologies across the University.

“It is interesting that you place geospatial librarianship as a subset of geography,” he said. “I wonder what librarians would say about that?”

Piekielek observed that geographers often seem to claim “everything,” or “nothing,” in the sense of borrowing theory and methods from other disciplines.

“Whether or not I am a geographer is debatable; it is pretty hard to put me in a box or assign a single title that well captures my career path–ecologist would work just as well, too,” he said.

“Titles are important, they dictate expectations, but in my case you might be surprised what you get. For example, I completed more graduate course work across two degrees in statistics than in geography.”

Piekielek said he has always had interdisciplinary interests.

“I love to learn new things and get involved in research projects that span academic fields, and my current position allows me to do both,” he said.

Penn State was an early adopter and participated in the Geographic Information Literacy project, a partnership between the Association of Research Libraries and Esri, an international GIS software company, in 1992. In 1994, the Department of Geography and University Libraries pooled their funding to create the first GIS librarian position at Penn State and later opened a GIS computer lab in what was then the Map Library.

“More recently, geospatial services here at Penn State have been in high demand,” Piekielek said. “We have done a pretty good job of getting the word out about our services and regularly help a pretty diverse cross section of the University, but there is more work to be done.”

Piekielek said that many academic libraries are in transition, and their future is not clear.

“I think the primary challenges for geospatial services departments have to do with continuity of staff and services, and familiarity of library administrators with geospatial,” he said. “Right now, geospatial remains a pretty fringe thing in libraries that gets shuffled around a lot within the organization and/or consolidated with other initiatives with which they are not necessarily well aligned. Both map libraries and geospatial services in libraries have struggled to find and retain their place, and this has limited their impact and effectiveness. I have a pretty clear story in my head about this that I have been trying to get out into a coherent paper for some time.”

Piekielek received his bachelor of science in geography from Penn State in 2000. While family played an important role in his decision to return to the area, he noted he loves being a part of the Penn State community.

“Penn State is full of really accomplished academics and intellectuals who remain down to earth and approachable,” he said. “I aspire to this real or fictitious Penn State ideal every day–to accomplish as much I can while remaining a humble student and generous community member.”