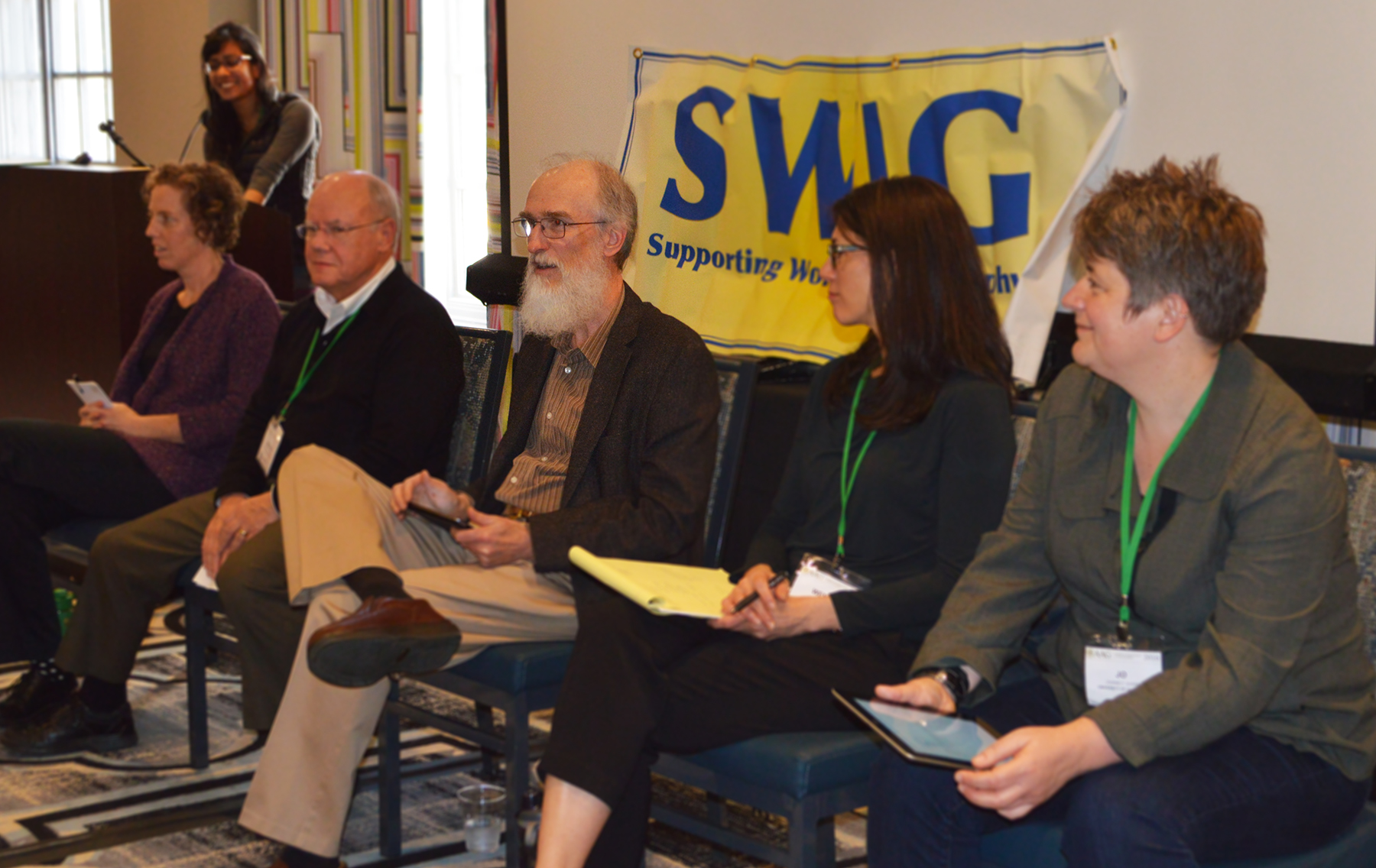 UNIVERSITY PARK, Pa. — Alan MacEachren, professor of geography and information science and technology and longtime director of the GeoVISTA Center from its formation in 1998 until 2020, announced his retirement this summer after 36 years at Penn State.

MacEachren was hired from the University of Colorado by then-department head Greg Knight in 1985 to join the faculty and lead the Deasy GeoGraphics Lab. At the time, the focus of the lab was making custom maps to support research and teaching.

Although he had just finished up his master’s degree in cartography at the University of Wisconsin-Madison, DiBiase said MacEachren brought him in as an academic peer with the rest of the department faculty.

“That set the tone for my relationships with faculty members in the department and beyond for years to come,” DiBiase said. “It created, as legendary Penn State professor Peter Gould used to say, the ‘condition of possibility’ for an entire career. Alan gave me more than advice; he gave me a future.”

MacEachren said the center quickly envolved into a broad-based center focused on all aspects of GISscience.

“But we kept the title since it was already well established,” he said. “Many GIScience research topics beyond ones focused on visualization were pursued over time, including work on spatial-temporal databases, geographic information retrieval, spatial ontologies, spatial cognition and others.”

Meanwhile, DiBiase transitioned the Deasy GeoGraphics Lab to have a bigger focus on supporting instruction. He later became founding director of the John A. Dutton e-Education Institute, and the Deasy GeoGraphics Lab transformed into the Peter R. Gould Center for Geography Education and Outreach, which produced custom maps and the University Park campus map until around 2018.

Reflecting on his career, MacEachren points to two projects that were especially meaningful to him because they were fundamental to the research in geovisualization, for which the GeoVISTA Center is best known.

Building upon that NSF project, the MacEachren embarked on  a 5-year National Institutes of Health grant on geovisualization and spatial analysis of cancer data. MacEachren led a Penn State team including Mark Gahegan (now at the University of Auckland) and Eugene Lengerich, professor of public health sciences and associate director, health disparities and engagement, at the Penn State Cancer Institute.

“Those two projects contributed to basic information science while having direct real-world applications related to the representation, analysis and presentation of geographic statistical data,” MacEachren said. Their impact continues as a scion of the NIH project is the LionVu cancer mapping tool.

MacEachren said his research interests evolved over his career, from an early focus on human spatial perception and cognition, the history of cartography and analytical topics in cartography.

“Over time, my interest in history prompted me to read widely to trace current ideas back in time and build an EndNote bibliography that now stands at 23,000 references,” MacEachren said. “That helped me ground my research ideas in a broad base of existing knowledge.”

MacEachren’s interest in human perception and cognition encompassed all aspects of how people interact with maps and technology that represents geographic data.

“The interest in analytical methods was key to my core research in what we now call geovisualization, focused on developing and evaluating interactive, exploratory spatial data analysis tools that help people explore data, generate hypotheses, and make decisions,” MacEachren said.

All of that led to MacEachren’s involvement in the emerging field of visual analytics.

“I was the only geographer invited to participate in the first visual analytics research workshop, which produced a report that has had a big impact on development of the field and my work since then,” he said.

That report, “Illuminating the Path: The Research and Development Agenda for Visual Analytics,” was published by the Institute of Electrical and Electronics Engineers (IEEE) Computer Society in 2005.

Alongside his own evolving interests, MacEachren said he has observed dramatic changes over time in the discipline of geography and in higher education.

“Geographers are much more active in acquiring external funding for research, which has led to projects that have greater impact and are typically cross-disciplinary,” MacEachren said. “Penn State has been a great place to pursue interdisciplinary research since it has consistently encouraged and supported work across disciplines.”

Regarding higher education, MacEachren said it has become more competitive, with increasing expectations for faculty to get external funding and publish, making it more difficult to achieve work-life balance than when he started his career.

Although MacEachren is bringing his career to a close, he helped start the careers of many geographers.

“I will miss interacting with graduate students and post-doctoral scholars,” MacEachren said. “Over the years, I have really enjoyed mentoring and collaborating with many graduate students and postdocs, including those I advised directly, those advised by other colleagues in geography and other departments across Penn State, and those from other places who were GeoVISTA Center visitors over the years.”

His former students recall how he influenced them and how they try follow his example in their work, and with their students and junior colleagues.

“Alan's 1995 book, 'How Maps Work,' remains a flagship text in cartography and visualization, and undoubtedly is the most influential text on my own thinking,” said Robert Roth, professor of geography at University of Wisconsin-Madison. “That book is the reason I applied to Penn State for graduate school, and really the reason I wanted to pursue a Ph.D. in cartography.”

One of MacEachren’s first doctoral student advisees was Trudy Suchan, now overseeing communications for geography at the U.S. Census Bureau.

“I was incredibly lucky to have paired up with him,” Suchan said. “He was a remarkably attentive and non-judgmental listener. He was generously receptive to an interlude of qualitative research among the prevalent quantitative research.”

Sven Fuhrmann, a visiting doctoral student and later postdoctoral scholar and research faculty member in the GeoVISTA Center, and now a professor of geovisualization and geoinformation at the University of Applied Sciences Munich, recalled how MacEachren’s high standards and mentoring made an indelible mark on him.

“‘This is really good work,’ Alan said when he handed back my first manuscript, now significantly drenched in red ink from all his remarks and corrections,” Fuhrmann said. “While one can quickly envision my facial expression, my immediate thought was: how can this be really good work, when nearly everything — except my name — luckily I spelled that correctly — was marked in red? What I realized, not only on that day, but also for the last 25 years that I have known Alan is that through outstanding mentorship, inspiration for the topic, and commitment to excellence, students and their work will become really good. So, when I hand back papers or other work assignments to my students and say ‘this is really good work,’ I always do this with a smile and reflect on the mentorship and friendship with Alan.”

“During much of my time at Penn State, I shared the office across the hallway from Alan with two or three other students for whom Alan was the adviser,” von Wyss said. “Despite our proximity, I didn’t learn much about Alan other than his good organizational skills, disciplined work ethic, and sharp academic intellect. But from Alan I learned a great deal, from critical thinking about map theory to writing code to produce a prize-winning visualization, and generally how to be a thoughtful, focused, and productive member of an academic community. Getting to know him personally had to wait 24 years, by which point we lived 10,000 miles apart. On his visit to Australia in August 2018, Alan spent a few nights as my houseguest. We didn’t manage to find the Superb Lyrebird in the surrounds of Melbourne, but over our kitchen table I was glad to discover the amiable, kind individual from whom I learned so much.”

Eun-Kyeong Kim, who graduated in 2017 with a doctorate in geography and now is a postdoctoral scholar at University of Zurich, recalled how her first impressions of MacEachren changed.

“When I just started my Ph.D., I was often nervous when approaching and talking to Alan because he is such a big name in the field of GIScience and known to be strict and scrupulous,” she said. “As I talked with Alan more often and regularly in the meetings and coffee hours, I found him so friendly and down-to-earth. In my experience, he always thinks from a student’s perspective and solidly supports them. I thank Alan for being the best adviser that I could have.”

MacEachren said he plans to pursue his professional research interests, unburdened by teaching and service obligations.

“Now, it is time to move on and make space for others,” MacEachren said, “A year with a global pandemic also put things in perspective, prompting the specific decision to retire this year. I plan to stay professionally active, focusing on research and writing that most interest me. As the pandemic abates, I hope to have opportunities to travel both for professional events and for birding (my primary non-academic avocation). The rest of this year, I plan to put more focus on birding than on research and writing — to start balancing out the life-work equation.”