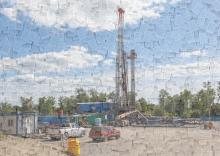 Federally sponsored science plays a more significant role in bringing together stakeholders and facilitating environmental governance debates than all other types of research, according to an international team of researchers.